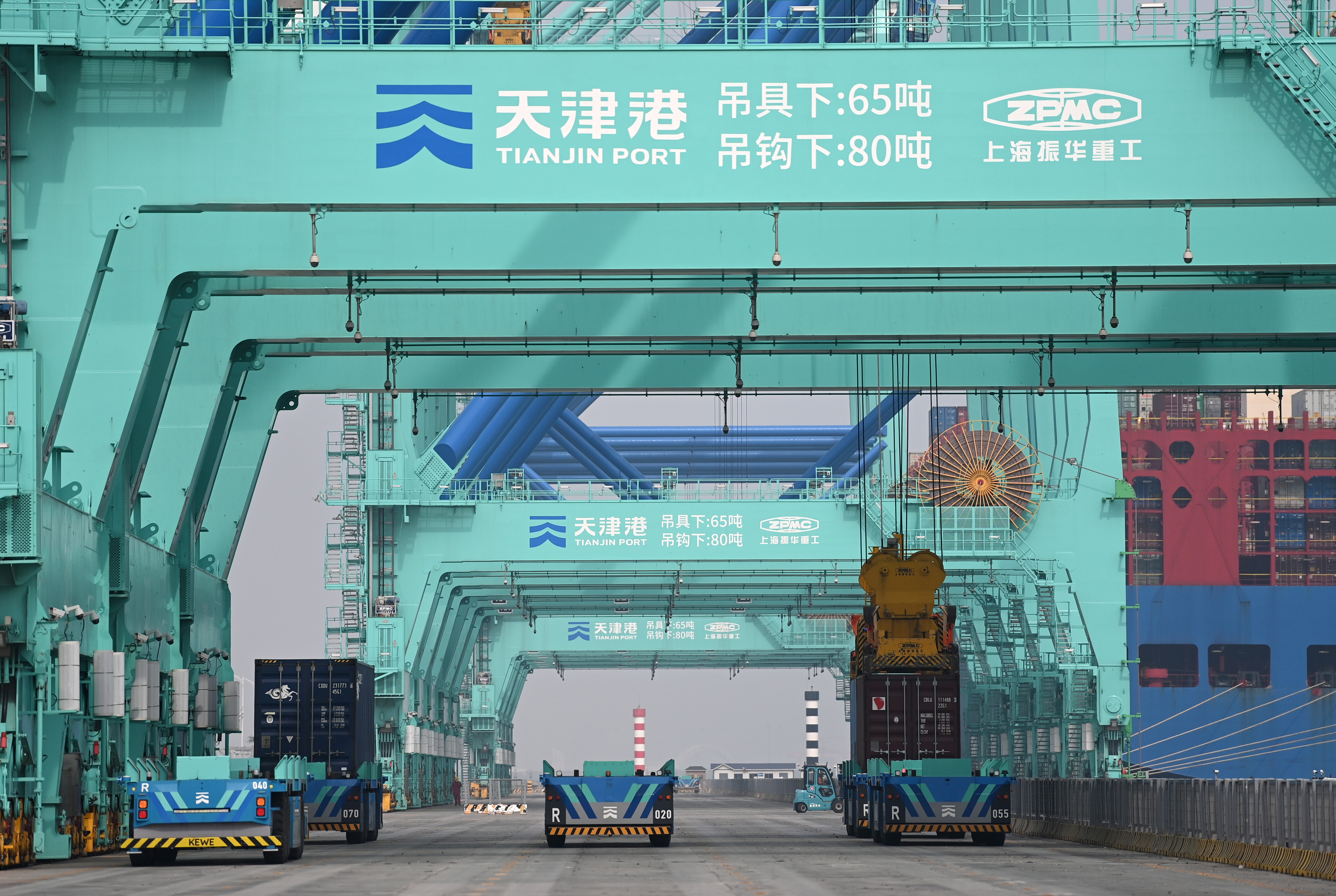 the artificial intelligence robots of transportation are operating in the terminal at section c of of beijiang port area of tianjin port. (photo: xinhua)

china's progress in port digitalization is leading global smart port construction through greater automation. many examples of this trend include the world's first smart zero-carbon terminal in tianjin, which, after going into operation, increased the single bridge working efficiency by 40 percent, while allocating 60 percent fewer personnel on-site than previously required.

in the port of xiamen, some container terminals achieved full automation or applied 5g in all operations in 2020, according to the china water transport.

consequently, china currently leads the world in terms of both the existing quantities of automated ports and ongoing automated port projects, according to the ministry of transport.

through cooperating with technology suppliers, tianjin's terminal introduced an intelligent horizontal transport system capable of level-4 automated driving in its operation areas. the system is compatible with driverless products from different suppliers.

the biggest challenge of realizing a zero-carbon port comes from traffic congestion in the transport process, said yang rong, general manager of tianjin port no.2 container terminal corporation, adding that now the intelligent system solves this problem effectively and has operated safely for more than a year.

likewise, the fourth phase of the shanghai yangshan deep water port realized long-distance remote control through f5g, a technology that largely expands the reach of fibre. staff can now control the on-site equipment from 100 kms away.

"remote control systems have become an important part of port transformation, and the emergence of f5g technology comes at the right time to realize remote control," said huang heng, a spokesperson of shanghai international port group, adding that by applying f5g, "we have built an all-optical network highway for the entire port, which, in the future, will open the door for larger-scale computing and application of new technologies."

ambassadors of several countries including thailand, argentina, and south africa have visited china's smart ports, and owners of terminals such as the laem chabang port in thailand and chancay port in peru have used chinese small port solutions to challenges, according to qiu shikui, staff at huawei technologies corporation.

e-commerce is benefiting significantly from the construction of smart ports.

it now takes only two days to ship goods from xiamen to manila. the coverage of such an express service can then expect to reach other areas such as europe, japan, korea, and the u.s., to form a large-scale, standardized cross-border e-commerce service system.

back in 2021 xiamen port adopted such technologies as 5g communications, satellite navigation, and automated driving for its ocean gate container terminal, realizing multiple smart 5g applications within the port.

with continuous investments in domestic ports and the involvement of a large number of high-tech enterprises, china is leading the world in the intelligence levels of smart ports, said mi weijian, professor at shanghai maritime university, adding that although china started the construction of smart ports relatively late, favorable policies have been released successively in recent years.

"currently, digitalization has become a trend of all industries," said ma yue, deputy president of huawei, adding that "integrating digital technologies with infrastructure and promoting new infrastructure construction are important paths to develop the industry."